Brussels/ Vienna –
Heike Arbter, Managing Director at Raiffeisen Centrobank AG, was again unanimously appointed for another two years as President of the European Structured Investment Products Association (EUSIPA) in the frame of the association‘s annual General Assembly meeting in Brussels. Apart from Austria, national associations from Belgium, France, Germany, Italy, Sweden, Switzerland, the Netherlands and the UK are currently members of EUSIPA.

“I would like once again to thank my colleagues across Europe for their vote of confidence as I look forward with great excitement to serving in this role for another two years. Although the EU financial services sector faces an avalanche of detailed regulatory implementation issues, we must not forget that our ambition is to focus on customer interest and to promote only those initiatives that truly add value to the market“, Arbter is convinced.

Heike Arbter has been heading the Structured Products Department at Raiffeisen Centrobank since 1997 and is responsible for the Bank’s becoming the number one issuing house of certificates in Austria and CEE. Especially at Raiffeisen, both in Austria and in CEE, despite extensive regulatory requirements we succeeded in enhancing the business of certificates in the past years. Heike Arbter has been acting as chairwoman of Zertifikate Forum Austria since 2009. In June 2015 she was elected the first female stock exchange council at Europe’s largest derivative exchange in Stuttgart.

Raiffeisen Centrobank is the competence center for equities and derivatives in Austria with a strong regional focus on Central and Eastern Europe. As a full service provider of certificates, the bank offers currently more than 6,000 products for each market phase and investment horizon. The coverage universe of RCB’s company research comprises about 130 Austrian and international titles. Raiffeisen Centrobank is a 100% subsidiary of Raiffeisen Bank International AG.

Austria's Certificates House #1: Overall victory at the Certificates Awards Austria for the 16th time in a row. 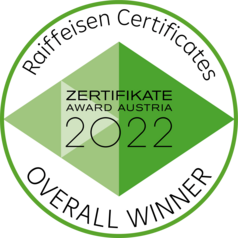